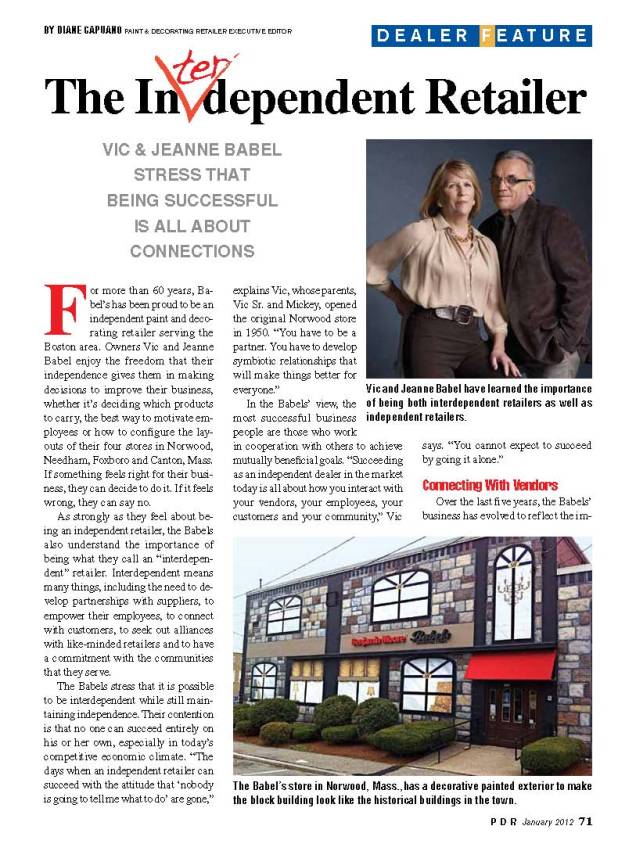 We are proud to say that Babel’s Paint and Decorating Stores has been chosen for the Dealer Feature in the January 2012 issue of the Paint & Decorating Retailer magazine!

Below is the text taken from the article. Enjoy!

Vic & Jeanne Babel stress that being successful is all about connections.

For more than 60 years, Babel’s had been proud to be an independent paint and decorating retailer serving the Boston area. Owners Vic and Jeanne Babel enjoy the freedom that their independence gives them in making decisions to improve their business, whether it’s deciding which products to carry, the best way to motivate employees or how to configure the layouts of their four stores in Norwood, Needham, Foxboro, and Canton, Mass. If something feels right for their business, they can decide to do it. If it feels wrong, they can say no.

As strongly as they feel about being an independent retailer, the Babels also understand the importance of being what hey call an “interdependent” retailer. Interdependent means many things, including the need to develop partnerships with suppliers, to empower their employees, to connect with customers, to seek out alliances with like-minded retailers and to have a commitment with the communities that they serve.

The Babels stress that it is possible to be interdependent while still maintaining independence. Their contention is that no one can succeed entirely own his or her own, especially in today’s competitive economic climate. “The days when an independent retailer can succeed with the attitude that ‘nobody is going to tell me what to do’ are gone,” explains Vic, whose parents, Vic Sr. and Mickey opened the original Norwood store in 1950. “You have to be a partner. You have to develop symbiotic relationships that will make things better for everyone.”

In the Babels’ view, the most successful business people are those who work in cooperation with others to achieve mutually beneficial goals. “Succeeding as an independent dealer in the market today is all about how you interact with your vendors, your employees, your customers, and your community,” Vic says. “You cannot expect to succeed by going it alone.”

Over the last five years, the Babels’ business has evolved to reflect to the importance of being an interdependent retailer. “We found that there’s a difference in how you manage a business in a flat economy versus managing in a growth economy,” Vic reports. “We changed our attitude and the way we approached our business.”

This change has impacted several long-term decisions undertaken by the Babels as well as how they operate their business on a day-to-day basis. “It’s not something where we can say, ‘We’re an independent, we can do what we want,'” Jeanne explains. “We are listening to our vendors and working with them. In some cases, we have to make compromises. We give up something, but then we get something in return. It’s a better way of working together – as partners.”

As an example, Vic and Jeanne cite a decision to consolidate all of their window covering business with a single supplier. “Five years ago, we made that decision to become a Hunter Douglas Centurion Dealer,” she says, “As a Gallery dealer, we already were doing 75 percent of our window covering sales with Hunter Douglas. We always believed they had the best products, the best displays and they provide a lifetime guarantee. When we made that decision, Hunter Douglas said, ‘Since you’re 100 percent with us, here’s what we are going to do for you.’ There were financial incentives to make it worth our while.”

With the commitment to Hunter Douglas, Babel’s has become the most well-known retailer for these products in the markets it services. “As a Hunter Douglas and Centurion dealer, we come up No. 1 in the search engines for the towns we are in,” Jeanne explains. “Since committing to the Centurion program, we’ve been experiencing double-digit increases every year.”

Two years ago, the Babels made a similar decision on the paint side of the business. They opted to carry Benjamin Moore as their exclusive paint line as a way to build a closer identity with the brand.

“We felt the positive outweighed any negatives,” Vic explains. “Benjamin Moore has a diverse line, with products for everyone at every price point. This enables us to meet the needs of all of our customers.”

“Over 10 weeks, they can earn $500,” Jeanne reports, “How we look at it is: If our sales are up, our employees should share in the achievement. Most of the time, the stores have been up in sales by 5 or 10 percent over the last two months. In the old way of doing business, employees were told what  to do. Now, we’re working together.”

“In the past, employees were looked at as order takers,” Vic says. Fortunately, those days are over, and I hope they never come back. The mindset has changed. We’re encouraging competition among our stores.”

And it definitely appears to be working. At the time PDR conducted this interview, Vic and Jeanne were basking in the good news that everyone at three of their four stores had earned $50 gift cards for the just-concluded week.

Employees also are empowered with the task of reaching out into the community to maintain and build new business. “Each store has a person doing cold calls,” Vic says. “It’s a more organized approach. It allows u to reconnect with contractors we haven’t seen in a while. If they bring in new business, they will be compensated for their success. Managers of each store responsible for maintaining the bigger accounts.”

Babel’s also stresses the need to have a strong connection with customers. The Babels do this by actively soliciting their opinions to make adjustments to product offerings.

“It’s not a matter of ‘This is what we have, take it or leave it,’ Jeanne explains. “It’s a more proactive approach. We do surveys and focus groups. We’re listening and getting feedback. For instance, we learned that some of our customers can’t afford custom draperies, so we made the decision to offer ready-made panels as well.”

As a means of reaching out to customers, Babel’s is using both new and old media. “Our marketing has become more social media-driven,” Jeanne says. “We do a lot with online coupons, using both Living Social and Groupon. Recently, we had customers redeem 380 coupons that offered a $50 gift certificate at the price of $25. It’s a great way to get people into the stores and is especially useful in attracting new and younger customers. We also are sending coupons via email blasts.”

Babel’s is active in all the major social media websites, such as Facebook, Twitter and LinkedIn. Vic and Jeanne especially like the fact that they can determine the impact of social media promotions, due to the redemption of the online coupon offers or other customer feedback.

“The best day was the day I got to go to the Yellow Pages guy and say, ‘I don’t need it anymore,’ ” Vic says. “My biggest complaint about the Yellow Pages is that I could never tell if my ads were working. The thing with social media is that I know it is working. We get immediate feedback.”

Babel’s also attracts customers with its popular consumer seminar series. Some of the more unique themes include the “Holidayscapes” event, which features great ideas on how to decorate for the holidays and also gets potential customers into the store at a slow time of the year. Another unique event was a runway-style fashion show in which the models wore dresses made from paint chips . “One of the dresses was a full-length wedding dress made out of all white paint chips,” Jeanne reports.

In addition, Babel’s vendors provide experts to come into the store to conduct seminars. Hunter Douglas hosted designer Sally Morse for a recent interior design seminar, while Benjamin Moore provided a color consultant to talk about the latest color trends. “We’re also training our own employees to conduct seminars,” Jeanne says. “We typically have more than 100 people at each seminar. People really enjoy them. Due to the economy, people are looking for ways to be entertained. These seminars offer food, punch, and a lot of goodwill.”

Another way that Babel’s connects with customers is by stressing the importance of creating beautiful showroom environments that convey a warm, welcoming atmosphere. “It’s almost like coming into a home,” Jeanne explains. “We want people to feel inspired when they walk in.”

As much as they connect with their consumer customers, Babel’s also makes a strong effort to connect with contractors. About 50 percent of their business comes from the professional painter section, and the Babels show appreciation in a number of ways. As an example they invited a large group of them to watch the Patriots/Jets game at a local drinking establishment. There were no sales pitches – just a chance to enjoy each other’s company and talk business in a low-key way.

“We used to have a Pro Show, but many of our contractors don’t have the resources right now to buy products way far ahead,” Vic says. “So, we’ve decided to do events like this. It’s a way to say thank you for buying without selling.”

As a near-term goal, Jeanne reports that Babel’s hopes to establish relationships with interior designers. “They use the store, but they don’t buy much from us. Our goal is to form alliances with some of these designers and build relationships in which they do buy more.”

Connecting with the Community

A vital component of being an interdependent retailer, from the Babels’ point of view, is to be connected to the community. “We feel community service is a very important aspect of what we do,” says Vic. “If we give to them, they give to us. We want people, when they think of paint and decorating in this community, to think of us.”

Babel’s also participates in Holiday House Tours in Norwood and Needham, which helps towns raise money to help their communities.

“We’ve also found it helpful to form alliances with like-minded businesses,” Jeanne reports. “We’ve made alliances with stores that sell floor covering, furniture, and other home decorating products and share in the profits.”

In addition, the Babels feel an interconnection with other independent dealers. They are members of ALLPRO and take advantage of various opportunities to interact with other dealers. They appreciate the fact that they can talk about their experiences in a way that can be helpful to each other.